Even If He Does Not

The other day, Benjamin asked Jarid and I if it was okay to pray for God’s will to be done, rather than to pray for healing.  He asked this as we were getting ready for bed, having just prayed over Kaiya.  Again.

You see, this girl, she continues to keep us on our toes, forcing us to surrender control and question whether we are trusting in ourselves, in man, or in our Almighty God.  The rest of us have dealt with a bit of a stomach bug, likely acquired from a recent trip into town. Isaac had the most sudden and, ahem, explosive onset, while the rest of us just felt “off”.  Kaiya struggled for a few days, finally succumbing to a fever with the rest of the symptoms.  She has always been susceptible to higher fevers than the rest of us.  Even as a little girl, she would get very high fevers for a simple respiratory infection or cold.  We know this.  This is true for our baby girl, nearly always.  And I’ve had a fairly high tolerance for a higher fever in her, allowing the fever to do its job, knowing her tendency. 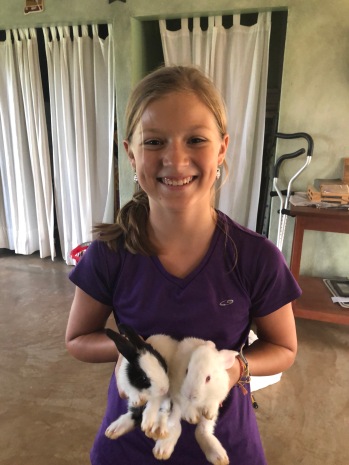 But this time, on Christmas Eve, even though five months separate us from her last scary incident, I struggled with the “what-ifs”?  Flashbacks of July 19th came flooding back.  A video reel began playing through my head: seeing her being carried down the hill at Musana Camps, the empty gaze as her body lay unresponsive at the clinic, Jarid trying to move her rigid body into the van so we could get her to the hospital, and many more that are probably too traumatic to write about here.

As Jarid and I discussed our options, I confessed my anxiety to him, desperately trying to take captive the thoughts that threatened to suffocate me.  He admitted to his own worries, and we began to talk though the realities, as well as the lies.  Deciding to continue monitoring and treating at home with high doses of vitamin C, probiotics, etc., Jarid, Benjamin, and I gathered to pray over our baby girl right before bed time.  The fever had been lowering slooooowly,  but we knew it could spike during the night.  And so we prayed, expecting for God, Jehovah Rapha, the Lord our Healer, to answer our prayers.

As we left her room, I knew I could only decide to surrender my fears.  Benjamin followed us to our bedroom and asked his question.  “Does it mean I don’t have faith if I pray for God’s will to be done instead of praying that Kaiya will be healed?  Because that’s what I was praying in the van when she was having seizures.  Is that okay?”

No, Benjamin, it doesn’t mean you lack faith.  Yes, it’s okay to pray that.  Discussing those answers, we assured him that it’s also okay to pray for healing, knowing that God WILL heal her, but it might not look the way we think it will.  The thing I want so desperately for my children to cling to is that God is still good, no matter what.  No matter how He chooses to heal, no matter how He chooses to work out a situation, He is still GOOD.  He is still sovereign.  He still loves His children.

“If it be so, our God whom we serve is able to deliver us from the furnace of blazing fire; and He will deliver us out of your hand, O king.  But even if He does not, let it be known to you, O king, that we are not going to serve your gods or worship the golden image you have set up.”

Benjamin, God is able to heal Kaiya.  Wholly.  But even if He does not, sweet boy, the Sinklers are not going to bow to the world, to the enemy.  The enemy would want us to bow to other gods: security, health, stability, modern healthcare, finding peace in those things.  We will not.  We will trust that as followers of Christ, as His children, God is working things for our good, for His glory, even if the outcome is not what we want.

Some day soon, I hope to begin writing more about my journey in dealing with anxiety.  For now, let me say with certainty that God has shown me that the biggest contributor to my own anxiety is lies.  Satan is the great deceiver, a liar.  He wants me to believe lies.  He wants me to allow those lies to grow unabated, to let them fester, to control me.  He finds my weak spots (health, security, stability) and he exploits them by telling me almost-truths, turning the lies into fear.  He wants me to fall for the lies…and bow to the world.

And I have.  I have turned those weak spots into gods and bowed to them.  But as He delivered Kaiya that day in July, He graciously gave me the strength to begin seeing the lies, to see the stranglehold they had on me.  As I have wrestled through (and still continue) the tedious process of identifying and rooting out those lies, I am learning to surrender those gods to the One who can deliver me…even if He does not.

P.S.  We did, in fact, get our Christmas miracle…Kaiya’s fever broke the next morning.  Praise God!  Even in this, I refuse to hold back from proclaiming His goodness!!!

5 thoughts on “Even If He Does Not”